It appears that the first working braille translator in the U.S., and actually anywhere, was the one developed at the American Printing House for the Blind (APH) in Louisville, Kentucky during the early 1960's by IBM and APH. Ann Robinson of IBM (later married to Joseph Schack, who collaborated in later work) started the project, sometime around 1960. The earliest reference that I have listed is IBM Mathematics and Applications Dept. document Braille Translation System for the IBM 704 by Ann S. Schack and R.T. Mertz, dated 1961.

The APH-IBM system was in use at APH by around 1965 at the latest. John Siems, then an employee of APH, authored a paper entitled Report of a New Braille Translation Program at APH in the Proceedings of a Conference on New Processes for Braille Manufacture held at APH in 1968. That APH-IBM system remained in use at APH for decades -- remarkably, because it was written in 704 machine code that had to be emulated on successive machines.

During the 1960's there was a great amount of work done on technology for the blind at M.I.T., under the direction of John Dupress, George Dalrymple and Robert Mann. For some time, MIT used a variation of the APH software on their 7090 mainframe computer. When that computer was scheduled to be retired, Robert Mann wanted Robert Gildea to write a new translator, written in a higher level language, to run on the new MIT computer. Robert Gildea worked at MITRE Corporation, so the software portion of the braille project was shifted to MITRE, specifically to use the talents of Mr. Gildea, a skilled blind programmer. Here is how Robert Mann described this in 2002:

At this time, Braille was the only means by which the blind person could achieve literacy. With the excitement of the early digital computer age acting as a catalyst, we turned our attention to the feasibility of computer-translation of text to Grade 2 Braille, the contracted form which speeds tactile reading and reduces the volume of Braille works. John Dupress served as consultant as the faculty and students wrote the DOTSYS code in FORTRAN using a novel segmented approach which accepted various inputs, operated on different computers, and could drive available outputs to produce embossed paper Braille.

Individuals and organizations external to MIT expressed an interest in DOTSYS and requested copies. We explained that the code was student-produced and certainly had "bugs." We could send a magnetic tape reel with the code but would not ask our student programmers to serve as troubleshooters. This proved less than satisfactory, but again providence intervened! The Southeastern Braille Library (SBL) in Atlanta burned, destroying its supply of Braille, badly needed by blind students and professionals in the area. In desperation the SBL asked if MIT could help; I explained that the original research, the programming of the DOTSYS code, was completed; someone else would have to refine our code to clear up any problems. Could I help if Atlanta found the requisite finances? I turned to friends at the MITRE Corporation (an MIT spin-off) who had the interest and competence to recode DOTSYS into COBOL and produce a reliable translation program.

By the late 1960's, there were at least a dozen or so researchers around the world interested in the subject, and several working programs were constructed. Of these, I believe the most influential, and the most widely used -- indeed it was specifically designed for portability -- was the DOTSYS III program that Bob Gildea, Jonathan Millen, W. Reid Gerhart and I produced at the MITRE Corporation in 1969-70. Of course our work was based on the earlier work at MIT. The initial user installation (at the Atlanta Public Schools) took place in 1970. That program was not only used in its own right at a number of institutions, but also became the "parent" of several subsequent developments -- notably:

A good summary of the state of affairs by 1973 can be obtained by reading the proceedings of the conference held in March, 1973 at the University of Münster in Germany, on "Computerized Braille Production". Papers by Bob Gildea and me describe DOTSYS III, but there are also papers by Coleman (England), Leffler (U.S.), Truquet (France), Vliegenthardt (Netherlands), Leringe (Sweden), Vinding (Denmark), Werner (Germany), Eickenscheidt (Germany), Britz (Germany), and Jakob (Germany). Of course, there were also some researchers who could not attend.

Among early braille translators, there were several distinct types:

Duxbury Systems started as a real commercial venture, and it was the first company founded to bring braille translation software to its customers. Duxbury Systems itself was founded as a partnership called "Gildea, Simpson and Sullivan" in July 1975 in the town of Duxbury, Massachusetts. We promptly began to work on a Translator product (based on the DOTSYS algorithms) and to seek customers. In March 1976, we incorporated as a regular "for-profit" Massachusetts Corporation with our present name. (Of course, being "for-profit" does not guarantee the fact of a profit, which is a whole separate subject.) The first installation of the Duxbury Translator took place at the Canadian National Institute for the Blind in Toronto, Canada, in July 1976.

The Duxbury Translator was the first to work with a second contracted language (Spanish, 1976); we have since implemented Arabic, French, Swahili, and a number of others, some of them "firsts" for the language involved.

Duxbury was also among the earliest braille translators to be implemented on a microcomputer -- in the late 1970's. We worked with North Star DOS, CP/M, and Oasis. These were all predecessors to the MS-DOS that since became dominant. In fact, I believe that it was the very first with any commercial presence, but I can't be sure because I believe there were also some other people experimenting, at least, around the same time. I do not believe that we were the first product on MS-DOS (1985), and I am not sure who was, but by that time we were less interested in "firsts". Nevertheless, I believe that we were the first on Macintosh (1989) and Windows (1991), for what it's worth. 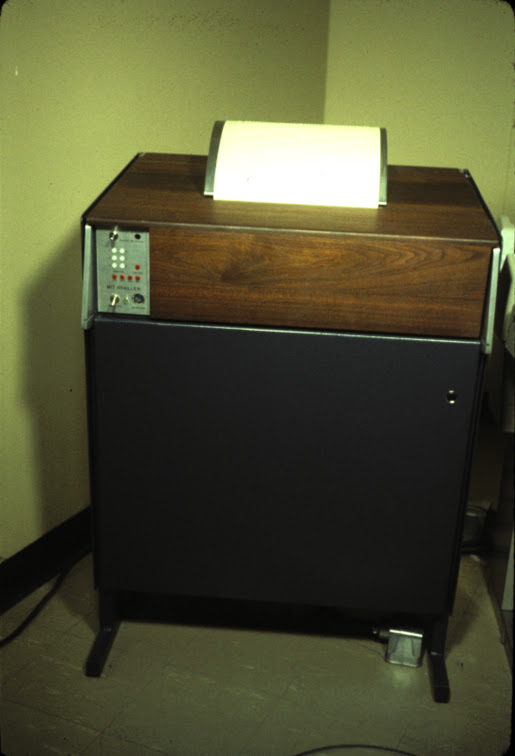 The photo (photo credit: Hank Magnuski) above is The MIT Brailler, which was a prototype for the MIT BrailleEmboss. The The MIT Brailler was barely useable, and frequently failed if there was electical noise on the input lines.

The next version, the BrailleEmboss, which was built at MIT in the late 1960's as the hardware component of the same DOTSYS project that gave rise to the DOTSYS III software at MITRE. George Dalrymple was the engineer for the BraillEmboss; Professor Bob Mann of MIT headed the project as a whole.

George tells me that, at a conference in 1969, there were four braille embossers being shown. His BraillEmboss was the only page brailler; the others (by Carbonneau, Morrison and Knox respectively) were all embossing on paper strips (being modified teletype paper tape punches). The December 1976 issue of the Braille Automation Newsletter December 1976 issue of the Braille Automation Newsletter lists 4 page embossers: the MIT BraillEmboss, the Triformations LED-1 and LED-120, and the French Sagem Embosser. So early development of braille embossers was slow, and they were expensive.

To drive the BraillEmboss from DOTSYS, I recall using a code that was really a binary code with 8 bits, 6 of which corresponded 1-1 with the dots of braille. The other two bits were used for control (new line/page) and/or parity.

In the spring of 1982, David Holladay purchased a BrailleEmboss from MIT. His unit was driven by an ASCII code, identical to the code we now know as the "North American ASCII system", except that two characters were reversed. In the 1969-1971 timeframe, MIT connected BraillEmboss machines at the National Braille Press (and other locations) via telecommunications with computers at MIT. When they did this, they found that the binary code was not workable and switched production to an ASCII code which is still in use today. For the record, the transition from the MIT BraillEmboss code to the standard today swaps dots 6 with the "ow" sign.

Duxbury Systems has created a webpage: Documents on Automated Braille Production. Those who study the history of automated braille production will find this material useful.